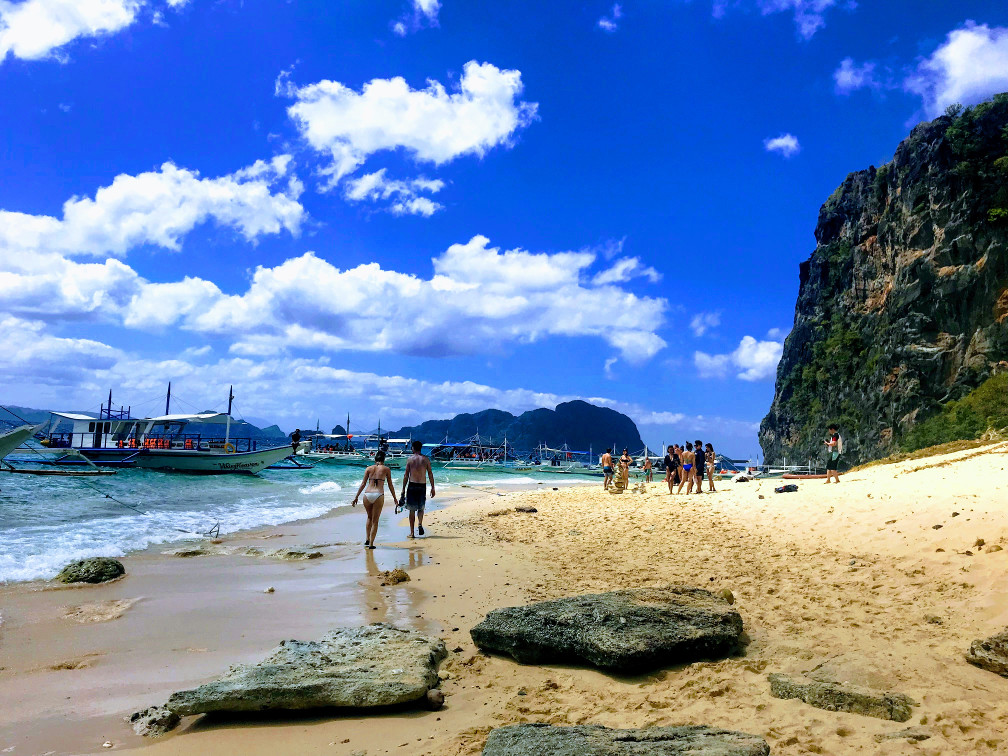 It is very popular to do an island hopping tour in El Nido on Palawan island. We went to a few different tour agencies, most of them were offering the same tours from A to D. Having dinner at The Happiness Hostel we saw that they also organise the tours. We thought there’s a good chance the people on the boat will be cool and it will be well organised. (The resto was tasty and nice, and the hostel hang-out area looked cool.)

The one recommended to us was Tour C, which was supposed to be heavy on snorkelling and avoid the very crowded lagoons. She specified that there will be no extra cost on the day. We paid the fee for the trip of 1400 peso per person, plus 200 peso eco tourism tax. You pay tax once and it’s valid for a week I believe, but we were here for only one day. Receipt in hand we agreed to be back here tomorrow at 8am sharp.

We arrived on time. Chilled on the swings of the common area looking at the penis-turtle shaped ashtrays. 😀

First of all, it turned out that the tour is not organised by the hostel themselves and a boy came to pick us up after it seemed like there had been a slight confusion and we waited for quite a while.

He took us to a travel agency, where we waited again. The tour itinerary seemed different to the one we had agreed to yesterday, but we didn’t have a picture of it and hence lacked bargaining power. It was either to go on the tour or not, so we went.

From the agency they took us to a beach where many people were waiting already and we were handed over to a desk and some guides. The agency people then left. We were advised to rent booties from a stand there as apparently it would otherwise be painful to walk in some spots. It was cheap enough (100 pesos) so we went for it. Then had to wait again for a long time as apparently the coast guards control the entry of boats and not all can come at once. Time was not specified, but it took almost an hour. It’s easier to wait when you know how long it will be, could sit down and read a book.

Finally the 20 people with orange tags were asked to board the boat.

As soon as we headed off to the first spot the crew introduced themselves. To my worst nightmare the main guy turned out to be an entertainer – pulling cheap card tricks and being very loud all the time.

At some point during the day he asked every nationality on the boat to sing, to be in a draw to get a prize at the end of the day. The Romanians sang Dragostea din tei, Russians sang in Russian, Filipinos sang in their own language etc. The Americans refused to sing. Then he turned to me. When boarding the boat he asked me where I’m from and hearing Estonia it was obvious he didn’t know the country. So now when he wanted to have fun on my account asking me to sing I told him: “If you tell me where my country is I’ll sing.” He replied with “OMG” and walked off. He got the point for the rest of the day not to try to entertain me.

First stop was Helicopter island. Nothing special about it except that it’s shaped like one.

We snorkeled, but the current was too strong and there were an insane amount of jelly fish in the water. I freaked out trying to avoid them touching my bare skin and got out of the water.

So we just chilled on the beach under a palm tree until it was time to go back to the boat. The beach was nice, but the sands not as white as you would expect. Nothing compared to e.g. Koh Rock in Thailand.

A Russian had gotten carried away somewhere, so we waited for 15 minutes until one of her friends went and got her.

Lunch with a fee

Second stop was lunch. It was organised on a private island with a shine and they wanted an entrance fee of 100 pesos. As most of the people on the boat (incl us) were told that there will be no additional fees on Tour C (in contrast to the lagoon tours) there was quite a protest. But at the end the fee was small so we all went. It was a religious shrine, but with nice views. The philosophy was a bit confusing and even the sign read ‘please refer to the attached PowerPoint presentation’. 😀

It took a long time to get the lunch but it was pretty tasty. This was also the only time we were offered water during the whole day of snorkeling. We took the drinking water included a bit too seriously this time and left our own bottle at home. (Usually we have one on us just in case.)

At the third place we snorkeled close to the shrine. More fish! V had raided the snorkeling equiptment bag and found better ones than the ones we originally received and snorkeling took a much better turn. The first ones were new but children size and kept leaking water into the mouth.
The amount of jelly fish was crazy when trying to return to the boat. The Romanians got stung pretty bad. I managed to somehow avoid them. But the guy picked it up and showed us it’s not poisonous. Ahah, will still sting.

Fourth place was pretty cool. Swimming under the cliffs to a hidden beach. It was full of tourists though. Some couples were taking insta photos.

We admired the diverse sand.

I skipped the snorkelling in the 5th place as the current was too strong. It did not look fun. Half of the boat skipped it. Even though the Filipino group who didn’t know how to swim diligently went, with faces slightly freaked out. Brave!
The Americans had an excellent drone and flew it over the beach. It was probably a much better view than snorkeling there. Beautiful!

As we were leaving a French couple and us were sitting in the front of the boat, securing our places not to get wet. The entertainer then came and asked us to leave, saying we need to keep it clear for safety and asked us to go back to our seats. Some minutes later the 3 Russians, who had been sitting there in the front the whole trip, went and sat there again and no one said anything. The entertainer had been hitting on one of the girls the whole day and continued to do so when he took position in the front and started making something from the straws.

The captain who made everyone wet

On the way back the captain went with full speed and water splashed everyone on the boat until they were all soaked. We switched our seats for the front of the boat to skip the shower, as we had endured it enough already. The French girl was still very angry and upset, and now soaking wet. Towels were supposed to be included in the tour, but we never saw them.

All of the sudden we saw a massive turtle swimming in the water. It was the highlight of the day!

At the end of the tour the guy went around asking for tips and he made it big. Yelling out the countries and stopping in front of them until they put money in. Bold. Either he realised that we didn’t appreciate his entertainment or didn’t want to embarrass himself not knowing our countries he did not ask us for tips. Good choice!

Shocked by the day we had, we realised that if coming here with friends in a group of at least 6 it definitely makes sense to hire a private boat and tour more private places around. We went to Happiness to give feedback and asked whom we actually can review as we weren’t sure which agency finally served us. The owner of Happiness was there and listened to us and tried to explain all the waiting. But he seemed to at least understand that his staff needs to be more transparent with the customers and manage expectations. He offered us drinks on him but all we wanted to do is pick up our crepes and buy beers and chill in silence on our balcony. So that we did.

In total we paid for this day trip: 1400 PHP for the tour + 200 PHP eco tourism tax + 100 PHP for the booties + 100 PHP shrine entry. Exactly 30 EUR per person, which is definitely too much for the service. But we experienced it. It was a bit like Phi Phi island. Nice views but super touristy. And in Phi Phi you can snorkel with sharks, here there was barely anything to look at in the water, except for jellyfish. Would NOT do this again.