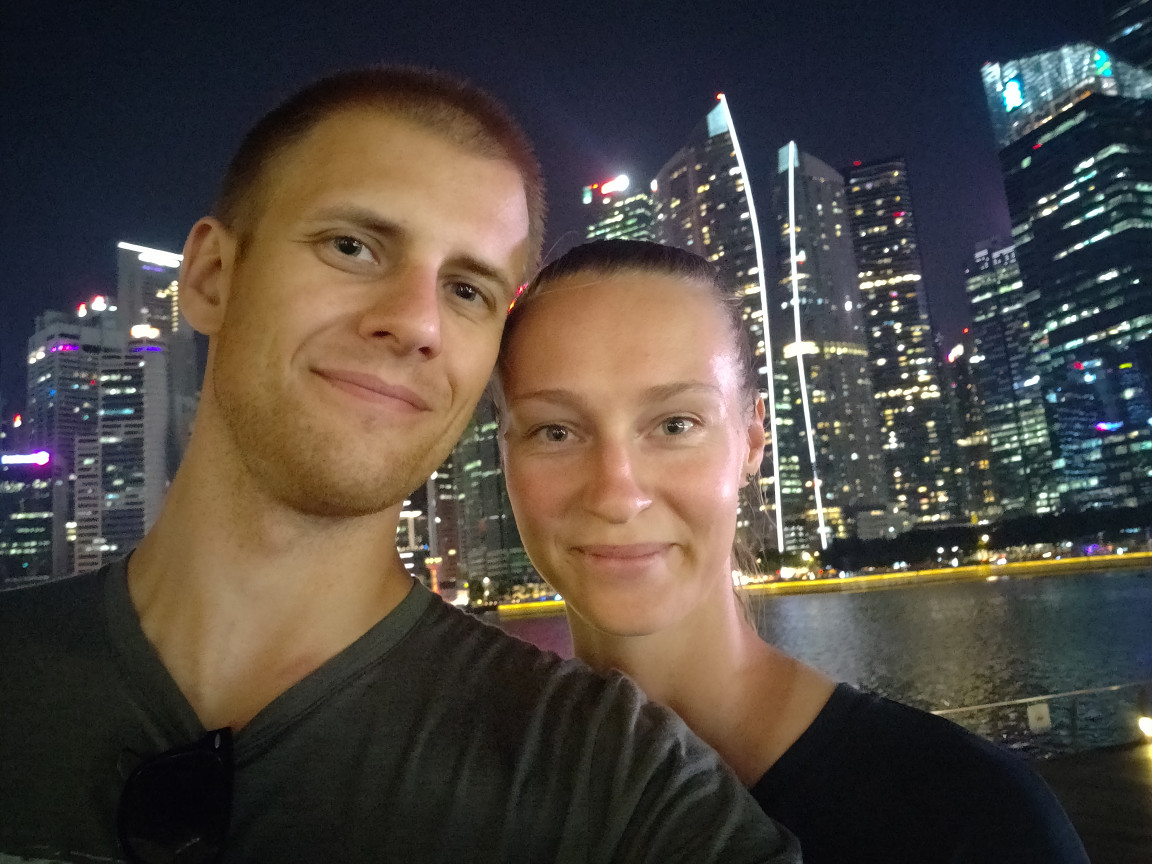 Singapore is known to be innovative, fast-paced and in general a role-model on the ‘zero to hero’ sample. This of course put it on our list of potential places to live in after the travels. So when we saw that the best way to get from Myanmar to Philippines is via Singapore anyway we decided to take a day to explore the city in person.

At the immigration area guy checking the arrival forms sang Frank Sinatra to us and said kind words. 🙂 And our Uber was a nice car that had functioning seatbelts. It’s been months since such luxury.

We arrived in the afternoon and had a couple of hours in the city before the sun sets. V thought that it would be great to have an electric scooter to travel around, he had done some research. So we spent about an hour to get a SIM-card in the city to have 4G service to rent them. Then we spent another ca 30 minutes trying to find them. They were in a parking lot on level -4, on a map all we could see is the building. Luckily a lady came to rescue and took us to the right place underground.

By the time we started the engines outside was already darkening. We had missed the sunset. #failno1

We headed towards China Town to grab something to eat in one of the famous Hawker stands. On the way we stopped by Park Bench Deli V had marked down and had a tasty snack.

By the time we found parking for our scooters most of the stalls were already closed. #failno2

A sausage place was still serving food so we got some dinner. Not exactly the local food we were hoping for, but killed the hunger.

Decision to continue on foot was a great idea. Electric push bikes are not very convenient for this city: No paths, need to manoeuvre between people, can’t go very fast and finding parking is difficult. Maybe just for the Bay area cruising it makes sense.

Somewhere on the way to the Marina Bay area we stumbled upon a party street where local expats were having after work drinks. Amazing! It’s like London, but in good weather. You just grab a drink and stand on the street. Breathing in the atmosphere we got 2 glasses of “soup of the day”, a lovely white wine, and enjoyed the night. The local white people seemed a bit full of themselves. It’s visible that people work a lot, but they also seem to know how to have fun. This city could work for us.

We continued to take in the views of skyscrapers on the waterfront. Beautiful fireworks started, in honour of our arrival of course. 😀

The view differed quite significantly from what we had seen so far in Asia during our trip – clean, expensive, new kind of fancy art etc.

There was also a carnival on, what a great timing! We went to the Marina Bay mall to get some water and chocolates, and admired the inside for a short while. When we came out again the carnival had closed for the day and we missed out. #failno3

The time was getting late, yet our sightseeing was not over. We sat in the reception of the 5* hotel Marina Bay Sands and took the pass over to look at the Supertree Grove. Wandering around, thinking we could take another exit a staff member came to us asking if we are lost. He kindly let us know there is no other way out and pointed us in the right direction back. People are insanely helpful and polite here – never seen this anywhere. They seem genuine.

Nightbuses were running so we decided to walk a bit a catch one. I didn’t have exact change so wanted to overpay. (Just put the money into a box.) The bus driver saw it and asked me to underpay. Again with the amazing service people. We got home cheaply. 🙂

Our hotel looked a bit dodgy. They don’t take any card payment, cash only. And $55 SGD doesn’t get you a particularly nice room for the night. But it did the job.

The next day we still wanted to take the most out of the city before our flight, so we had booked discounted tickets on booking.com for the Cloud Forest and Flower Dome. We went to an office to pick up the tickets and walked to the biggest attraction in Singapore. Good thing we have 2 tiny backpacks (holding all our belongings for the trip) – they fit into one locker.

Free of luggage we entered into the masterpiece of the Cloud Forest. Wow!

Flower Dome had more things we know from home – strawberry plants, daisies etc. It was a bit less exciting, but I LOOOVED the sculpture.

We got a recommendation from friends to drink a Singapore Sling at a bar it was invented in. So we WALKED there in this HOT weather with our backpacks. I was so sweaty I could barely handle it. Walking was NOT a good idea today. That’s what happens when you travel on budget though.

There was such a long queue at the Long Bar. Seems that everyone wants to have a Singapore Sling at this legendary place.

But we were limited on time, so found another bar around the corner. They usually don’t serve cocktails for Saturday brunch, but the bartender had some time so agreed to make us two. It was the first time for us and we liked it!

A little tipsy we ordered an Uber and it was time to say goodbye to Singapore. We cruised in the nice air-conditioned car down the alley covered with beautiful violet flowers, through greenery back to the airport.

We got to the airport, changed clothes and proceeded to the counter. The guy asked us for tickets onward from Manila. I showed the flight Manila-Coron, but that didn’t do the job. Apparently you need a ticket out of Philippines before you can board the flight. We didn’t know this. And we didn’t really have a plan what happens after Philippines and how long we would be staying. #failno4 A man in the counter next to us said he’s been flying to Philippines for 10 years and no-one has ever asked for the ticket on the other side.

Luckily I had acquired a great trick in my sleeve when applying for Chinese visa to visit Tibet. On website called travelocity.com you can book actual flights with a free cancellation within 24 hours, just tick the right box in search. So we booked tickets to Bangkok and went back to the counter. Now a different woman was attending to us. She asked for the flights, we showed our freshly purchased ones and our departure was approved. Then she started weighing our bags. #failno5

Hand-luggage limit was 7kg per person. We had ca 17kg in total. Luckily I had read the terms of Jetstar Asia before and there was an option to upgrade your hand-luggage to 10kg for half the price she was offering for a check-in bag. So we paid $40 to get the extra +3kg to take both our bags onboard as hand-luggage, that we have done without problems everywhere. Thanks Singapore for being so precise on following the rules.

The lady at the paying counter was again one of the super-nice ones and upgraded our seats for free to the emergency exit ones, which usually would cost $32. We finally proceeded to the passport control, that had a huge queue. Good thing we came to the airport early enough to deal with all the issues.

I was so exhausted and annoyed from the a bit of a failed 24h in Singapore even the ladies giving free candy at duty-free, twice, couldn’t cheer me up. I was done with the country and ready to leave. The locals of course turned up with a lot of hand-luggage at the gate (where the security check is) and noone weighed anything. The lady at check-in was claiming they will weigh and won’t let us board. Bullshit! We had to pay because we couldn’t use the machines to check in. ..and our bags didn’t meet the criteria. But it’s still unfair discrimination. Tourist exit tax is what I named our ‘fine’.