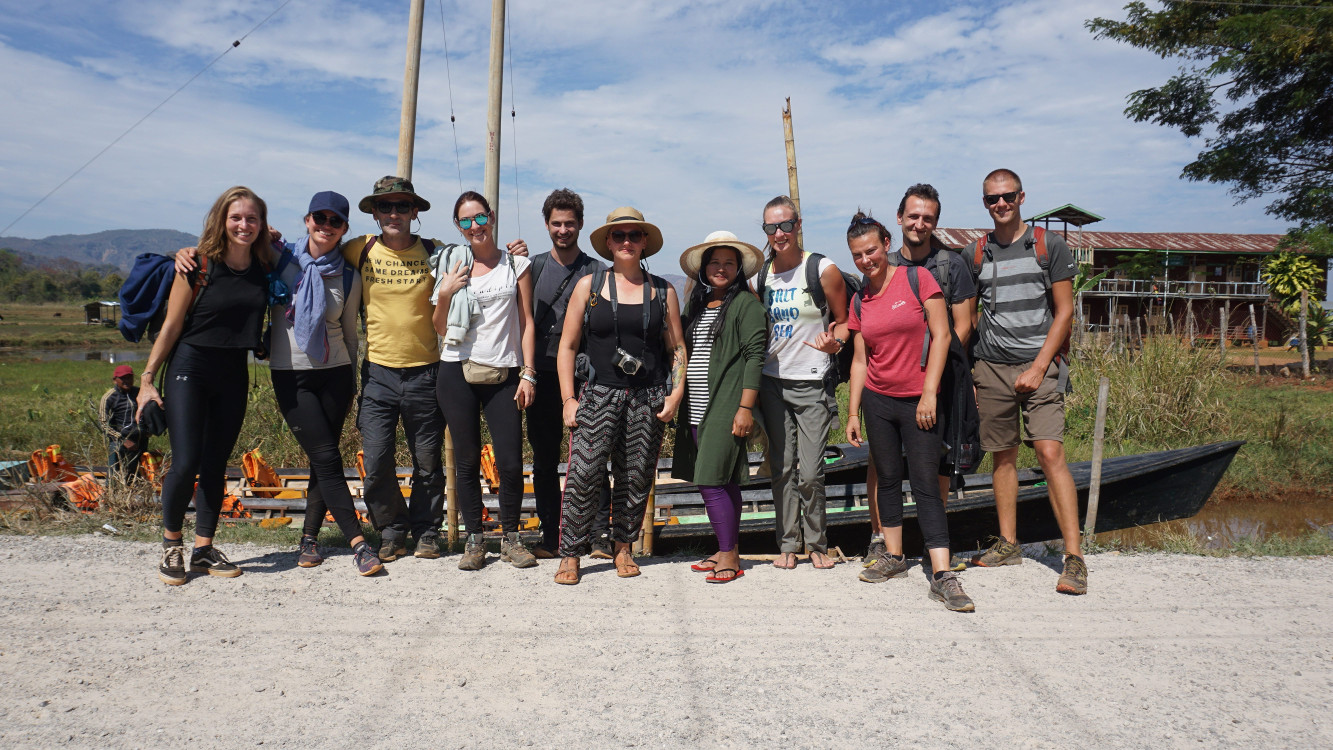 Choosing whom to go with

A couple of days ago, in the evening of our arrival in Kalaw we visited the various agencies and decided in the end for Ever Smile Trekking (EST).

It was mesmerising how much the pricing varies for literally the same trek. The popular Jungle King agency seemed like a conveyer belt service, whereas price didn’t differ much from EST. Highly rated Ko Min Kalaw Trekking takes maximum 6 people per group and cheapest price is 65 USD per person. Whereby EST had the same trek, just a couple more people, for 40k Kyat (26 USD) per person. And the service was much more personal and friendly. They all say off the beaten path. 😀

In the morning of day 1 we met up at the office and were allocated into groups. We got 3 Germans, 2 French, 2 Spanish and a polish girl in our gang. Interestingly all 3 cameras in the group were the same ones (Sony alpha).

Unfortunately the owners daughter, whom we hoped and requested as guide as per amazing reviews, didn’t go today, but we got another knowledgeable and friendly woman to keep us alert. 🙂

The journey went past an old train station into the forest. There were some hills and people got out of breath, but our Nepalese training seems to have helped us to the top of the group. 🙈

This was my opportunity to find out anything from a local Myanmarese (the guide) and I used it well.

Apparently the British brought a pine tree over to Kalaw area and now there’s a beautiful pine forest. (Very unlike the Asia we know.) Locals use it as firewood and to make candles. Very useful!

When a boy is 8 a big party is thrown for him as he will be sent to a monastery. Parents are saving up for years (basically from birth) to throw this fest inviting at least 1000 people and the donations will go to the monastery.
Our guide’s son was living with grandparents hundreds of kilometres away so his parents can both work maximum hours in the ‘city’ to earn the money for it.

Weddings cost ca 2000 USD. (Please imagine how much this money is worth in this part of the world! This is an insane amount!) You get back ca 1500 USD in gifts. Around 1500 guests attend and it’s always noted down how much money someone gave. When you attend their wedding in return you have to give at least the same amount or more. And people seriously keep track of these things.

As people get richer they replace their bamboo houses with stone houses. There’s quite a lot of development visible in this area.

Then we got to the most intriguing topic that has been of interest to us of course: The Rohingyas.
The local view was (as probably expected): they believe in a different god and then start being violent. After some discussion she softened a bit and tried to think realistically. However, I understood her statement more when she gave information about the behaviour of the army towards the Buddhist population.

Before 2011 you were not allowed to talk about the army, you would be killed or go to jail for that. This has at least changed for the better. But apparently no one likes the national army, as when the men come to the towns/villages they rape women sometimes and are rather violent. So it’s not only the Rohingyas that get such treatment, it’s everyone. With the Muslim population just likely a lot more extreme.
They also have local armies and they are much more liked over the national one.

Avocado salad is very common here, like a national dish. And avocados are so cheap – 5 big ones ca 0.50 EUR.
Eva: “How come guacamole is so popular in Myanmar? Did you copy it from Mexicans?”
Guide: “Oh, is it a thing in Mexico?”
😀

Men work short hours, but intensive work. Women work the whole day, but do less demanding jobs. I am not sure it equals out fairly.

Then to relax women can be seen with a cigar and men drink rum. We saw the latter first hand at a farm we passed by and the old lady invited us for tea. We ended up tasting a lot of snacks, local alcohol (the rum the men were drinking) and observing the locals.

They have a festival to welcome the rainy season. They shoot rockets. The legend has it if you don’t celebrate the area won’t get any rain.

They have many female guides for this trek. Complete opposite to Nepal.

Young children are excited to see us and scream ‘Hello’. A bit older ones look a bit ashamed but still say ‘Hi’. The ca 10 year olds just walk past and pretend as if you don’t exist.

Food was super tasty everywhere, and we had LOTS of snacks. I especially loved the pancakes for breakfast on the last day. 🙂 Also a lentil ginger soup became a favourite.

Just one small side effect. Waking up in the idyllic first house I felt the need to run to the bathroom whilst everyone else was still sleeping. And that need to run for the bathroom continued the whole day, and into the next. Wow it is difficult to walk up the hill when you are trying not to shit your pants at the same time. I was the only one feeling bad, so don’t know what caused it.

After a couple of hours walking I of course started feeling weak and blacking out. V took my bag at some point and with sitting down every 100 meters I managed to get to a supermarket/cafe stop. We stocked up on good water (I was too paranoid to drink the purified one so dehydration played a huge role). The French gave me a tiny towel with tea tree oil to put on my tummy. Over lunch I could luckily take a nice nap that helped me recover.

The coldish swim towards the end of the day was especially refreshing.

In the first accommodation place I was first to enter the house so we got the best beds. Well, beds were the same but we had our own room whereas the rest all slept in a row. I looked out of our window and saw these HUGE pigs outside, couldn’t believe my eyes. Later the French asked me: ‘Did you see the enormous pigs?’ And we all had eyes like we are changed people from the sight. 😀

In the evening we chilled by the bonfire drinking beer, playing some games and chatting. Interesting was that the French couple has travelled somewhat, but their English wasn’t so good. They kept looking at me to translate some words. Haha. I didn’t expect my French is so ‘trustable’. 🤣Also got to practice some of my German. The whole group was very nice and diverse.

The second night we slept all in a row. The family cooked us dinner and then we all dosed off. The sleep was always comfortable and good.

In both places toilets and showers were shacks outside. Not easy when you have diarrhoea but need to spend time putting on shoes, going down the stairs etc.

The places were always idyllic and local, yet you had everything you need. (Except for hot water in the shower. :D)

Scenery and the path

We walked through many villages and fields, the path was rather easy yet scenic. It doesn’t have the wow effect of some crazy waterfalls or beautiful mountains, but you see a lot of local life and e.g. the biggest pigs you’ve ever seen in your life. 😀

On the last day all the groups ended up on the same road. V gave a blister plaster to a girl who could barely walk. And we met my vipassana roomie Inji again. She took the expensive ferry from Bagan to Mandalay that we considered. Apparently there were only 6 people on the big ferry. She said we didn’t miss out on anything much on the cruise and Mandalay. Yay!

The end was particularly exotic when we walked on red ground in a bamboo forest until we ended up in the Inle lake zone. We had a good lunch and celebration, took a group photo and jumped in boats of 4. On the way across the river we were entertained by the ‘dancing fishermen’. The must-see in the area nicely ticked off during the trek already.

I would definitely recommend the trek. It’s nice to be in the nature and active, but most importantly it gives so much insight into the local Myanmarese life! We were also very happy with Ever Smile Trekking agency.