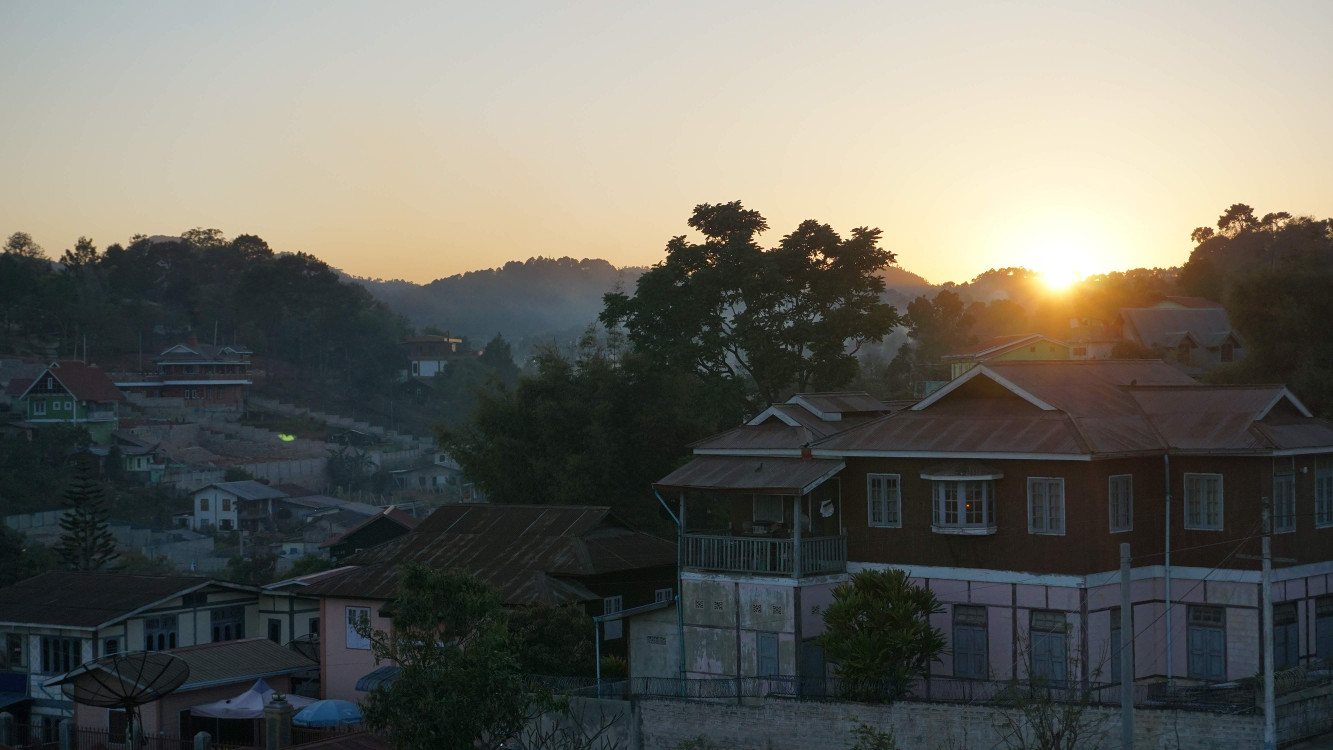 Kalaw is such a great place I thought it deserves it’s own post! 🙂 Definitely worth spending at least a couple of nights, if you don’t have time to take a proper break in this mountain village.

We arrived from Bagan by microbus at around 4pm. Our hotel Golden Kalaw Inn wasn’t anything great, but it did the job and the lady at reception gave us a good overview of what is there to do in town.

Hungry, we decided to focus on food rather than sightseeing. I found a place that had an excellent rating and reviews, but was a bit out of the way. Google maps didn’t have the correct street marked so we got a bit lost at the end and ended up in a military zone. Clearly this seems to be happening a lot as the soldier kindly pointed us in the right direction when we mentioned the name of the restaurant. 😀

The location out of the way meant a really nice path into the nature and an area that looks like Swedish style summer cottage land. 🙂 I wouldn’t mind renting one of these are spending a couple of weeks here. Beautiful mountain air as well.

New Simple Life turned out to be our favourite food place during the whole trip. It was Italian food, everything home-made. We later met the owner and it turns out it’s a Myanmarese lady, who studied French cuisine in Malaysia. The ingredients for french food are difficult to find here, so she opened an Italian restaurant as she can get everything she needs from the local farmers growing specialties (like basil). So wonderful!

The food was just incredible. We shared a soup of the day, which was a mushroom soup. And may I point out I usually don’t eat that, but this was divine! A fresh salad, chicken pasta and the firewood oven baked pizza made us so happy. We couldn’t believe such a place exists in the most idyllic yet random places in Asia.

Needless to say we returned the next day to have smoothies, pasta carbonara and another pasta. Also tried the banana cake, which as you might expect was also supergood!

We ended the day by visiting the trekking agencies to pick one for a 3-day trip to Inle Lake.

The next morning after the hotel’s modest breakfast we went to what the lady at the reception called a ‘special market’. Apparently the local market switches towns every day and we were lucky it was in Kalaw exactly today. Anything from chillies, fruits and fish to clothes, flowers etc is sold. Colourful clothing worn by the women, and so much ethnic grace.

Monks/nuns were going around collecting money – which I found a bit unfair. They work so hard to make money selling their fresh produce, carrying them from village to village, and then some lady-monk in pink just goes around and collects all the hard-earned money. She had a stack! Crazy!

Then it was time to exercise and burn some calories. We climbed up to the viewpoint. Seems that we are still fit. The temperature here in the ‘mountains’ is cooler and nicer, but still hot. A quick break to dry the socks in the pagoda area, take some pictures and chill and down we went again.

Sightseeing number 2 took us through a residential area where people live rather well – big houses built. And through a military area again, this time correctly. 😀 Our destination was the famous buddha cave. Basically it’s decent sized caves full of bigger and smaller statues of buddha. They actually look quite interesting and very different. I much liked the Japanese-looking one.

Dinner at our favouritely amazing resto as mentioned. And we enjoyed the sunset on our hotel’s rooftop.

Yet the highlight of the day was still ahead of us. We thought we should grab a drink tonight and be a bit wild. The town wasn’t very busy and not many bars. But on a street close to our hotel we found Snacks and Drinks. The most atmospheric place to end the night at. Again – a fantastic find. They serve sours only (Whiskey sour, Gin sour or Rum sour) and you get snacks for free – nuts, crisps and for the special late nighters also mini samosas. The craziest thing, 5 drinks and we snacked a lot for only 10k MMK (6 EUR).

The owner fit so well into the scene. Doing this with a passion. Doesn’t care about the money, but clearly about sours and doing what he loves. There was a french couple when we walked in, but they left shortly and all others were locals, it wasn’t a big place and we sat at the bar. So our kind of place!

Next to us was sitting a gentleman in a suit. We ended up talking for hours and getting drunk together, felt like we are friends when we were the last guests to leave and saying goodbye. He was building a hotel in town (called Pin Pin), otherwise from Yangon. We discussed local life in Myanmar and all kinds of world matters (incl religion and prayer trips, real estate). For some reason my notes from that night say we should watch House Hunter International – I don’t know why but I need to look it up. 🙂

One drink became a whole night, but a fantastic night! The wild ones before an early start to walk for 3 days.