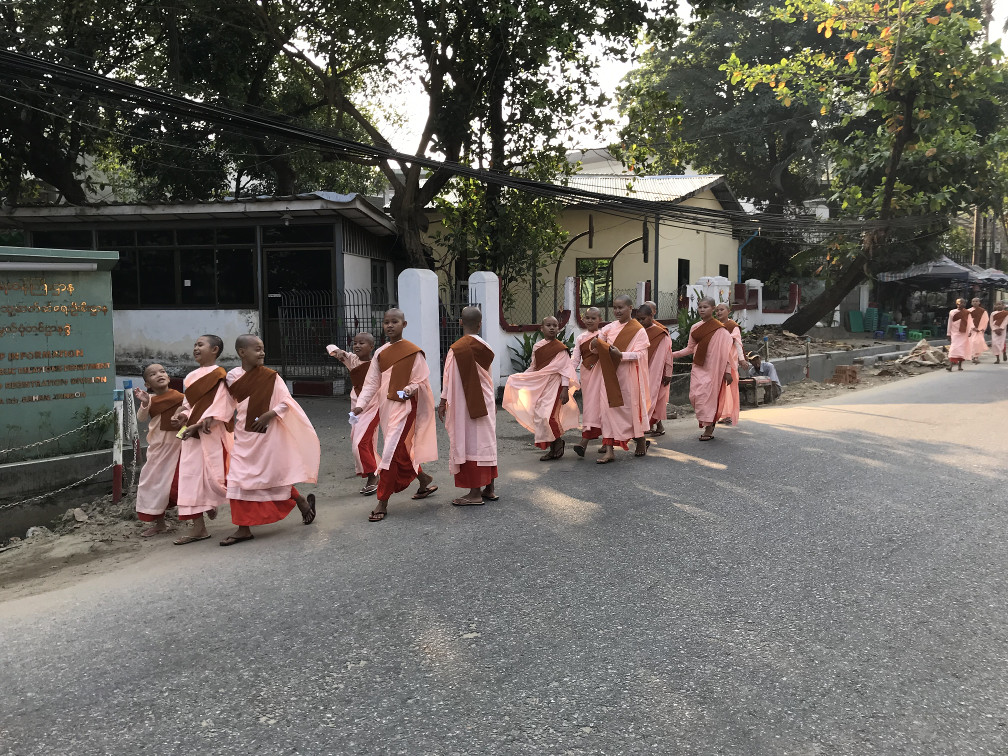 Mingalaba in the country where you need to master the perfect circle before you can learn how to write.

Entry into the country was so easy, the woman stamping my passport didn’t ask any questions. Moreover, we got SIM-cards at the airport and I could pay for it by card and they set it up for me in less than 5 minutes. Love this country already! 🙂

A spoiler alert: Myanmar turned out to be our favourite country of this big trip.

V was not very excited to go initially due to the support we would be giving to the government involved in a genocide. Which is a valid point. However, I have wanted to visit for a long time, and really wanted to go. As it turned out the political situation is keeping away most tourists, so it was even better for us as there were no big crowds. But they will come, as this country is too amazing. We were fortunate to visit before it becomes the new Thailand. And it was perfectly safe. To go to the dangerous areas you need special permissions, so you can’t accidentally end up in a middle of sexual and physical assault.

I’d say 3 main characteristics for the country are:

Purified water is available everywhere to fill your water bottle and many places are against plastic straws. Either you get a metal straw, a bamboo one or none at all. Yay for sustainability!

We did witness them making asphalt still extremely manually though, so there’s room for development.

We arrived in the evening of 20th January and spent 2 nights exploring Yangon.

In the morning of 22nd I waved V goodbye as he drove off in a taxi to catch a bus to the South. You can read about how amazing the beaches were and how much he loved his adventures here.

I went for my Shan noodles to make sure I don’t start off hungry, read a book by the lake and then went and gave up all my valuables to focus only on the vipassana mediation for the next 10 days.

We continued together to be mesmerised by the sun rises and sets in Bagan. Discovered our happy place in Kalaw and trekked for 3 days from there to Inle Lake. Spent a couple of days there, a final night in Yangon and flew off to Singapore on February 15th.

Also known as Rangoon. Yangon was very positively surprising – full of design and good service. Even though most people we met didn’t like Yangon, said it was too hectic and busy, I found it relaxing and great. 🙂

The city does have appalling traffic, insane jams. Scooters and motorcycles are not allowed in the city, which means the streets are crammed with cars and buses.

Funnily as we checked in to Backpacker Hostel I met a Finnish guy who speaks Estonian in front of the hostel. How random! He was rather wasted and kept talking about his times at Õllesummer. 😀

During the country visit Lithuanian colours followed us everywhere, as the flags of the two countries are almost the same.

Night-market was a full of electronics – maybe even had some old-school Nokia ones on sale. 🙂

We found a great place called Gekko to have a welcome cocktail. Looked like a European bar. And the cocktail Way to Burma was fantastic.

Rangoon Tea house is a great experience for local tea in a posh setting, see the menu. Cheesecake was ok, but nothing special.

V decided that it’s a great time so see how he would look bald. So we went to a salon. The guy first made one haircut. V wanted it shorter. He went shorter but still not enough. Then the guy gave up and just shaved everything off with a machine. 😀 Experience was great, can defo recommend Hair cut National.

Shan noodle is Myanmarese most famous dish. And it is incredible! We definitely got addicted and want to make this later at home. 999 Shan Noodle House has excellent price and service!

In the afternoon we first explored the local market.

Then we joined the free walking tour. Some interesting findings from the guide:

NB! There’s a yoga class for 5 USD at the Indian embassy, which I unfortunately missed.

For my final dinner we went for a burger and wine at 50th Street. It wasn’t very good, but for the next 10 days I had no meat and no alcohol so I appreciated every sip and bite.

The morning I was released from the meditation centre V picked me up and took me to a posh french cafe. 🙂

Then we visited the biggest tourist attraction in Yangon: The Shwedagon Pagoda. Tourists need to pay 10k MMK and locals go for free. I guess we couldn’t disguise ourselves enough. 😀

In the evening we had a cocktail at a rooftop bar. The menu and place were very cool. But it was obvious that they had hired someone to set this up, but then broke down in managing it. E.g. They didn’t have the blue caviar garnish, so said they can’t make the cocktail. Just invent some new garnish.

After the country tour we spent another night in the city.

I dropped by the Dhamma Joti meditation centre to make my donation (as apparently Revolut and Transferwise don’t support transfers to Myanmar) and encountered these lovely monk girls in pink.

We had an enjoyable, yet very expensive meal at Union Bar and Grill. And the next day more Shan noodle at 999 and a drink at Gekko.

Cheapest country in Asia that we visited with an incredible price-quality ratio. We spent 1300 EUR in total, which makes 50 EUR per day.